skip to main | skip to sidebar

The Calgary Flames Have (On Ticket Master) 1,846 Tickets for Sale or Resale for the Halloween Game

The title says it all. As of today, the Flames have 1,846 tickets available for purchase (or repurchase, ie people with the tickets trying to resell them because they aren't going to the game) on ticketmaster.

That's very similar to what they had available for the home opener. Fifteen thousand showed up to that, per ESPN. The 'Dome holds nineteen thousand people.

Are we starting to see a trend where the 'Dome goes from sell outs to being four thousand people short? Seems like a big number. I'm not sure if the suite ticket sales are included in the 1,800 (which seems to turn into four thousand at game time). When I was there for the opener I would say about a third of the suites were empty.

What's the argument against trading all the vets and starting a rebuild, exactly? They can't sell out the building keeping the vets on the roster. The chase for eighth isn't as exciting as they thought it would be, I guess. You can sell fifteen thousand tickets with kids, can't you?

They were selling more tickets rebuilding than they are with a vet team. People are sick of the .500 hockey.

It could be COVID. It almost certainly is the vaxx mandate keeping people away. But I want Treliving fired so I'm gonna ignore that shit and blame it on his idiocy. HEY IDIOT: IF YOU ARE GOING TO ANNOUNCE LOUDLY AND PUBLICLY YOU ARE GOING TO TRADE THE BUMS AND THEN YOU DON'T TRADE THE BUMS, PEOPLE MIGHT GET DISILLUSIONED. 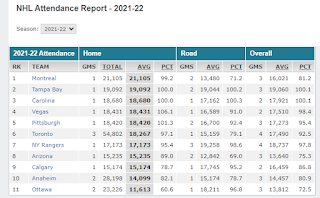 15,174 people showed up for the home opener. Unfortunately, I was there as well, no jab. Talked my way in. Wasn't too difficult. I'm handsome and the ticket taker girl was cold.
Inside...there was no energy. Like a Wednesday game against Minnesota in February. Beers are $10.75. A popcorn is $7.75. The ushers are all old women who tut tut everyone over wearing a mask. I didn't wear one all night, they didn't bother me. I'm handsome.
I have been to every home opener for like a decade. The Flames usually put some pomp and circumstance on the home opener. A cool video package, some nice on ice graphics. An attempt is usually made to pump the crowd up. At this home opener they had none of that. Like, zero. They had some nurses come out, and they got golf claps. None of them had normal names. There was an asian chick names Lyle. It was all very weird, and again, no energy.
And then...the anthems. There was no attempt to juice the crowd. It felt cheap. If the team isn't going to try to entertain the crowd, I don't know why they expect the crowd to cheer. I imagine the people on TV were wondering why there was no chant to start the game. Well, that's why. The team itself iced the crowd with its lackluster home opener ceremony.
And again: fifteen thousand people showed up. That's embarrassing. This is the first time they have played in like a year and a half. If any game was going to be full, this is one of them. And yet, fifteen thousand. Whole sections were empty. If you plan to go to a game, buy the cheapest seats you can, there will be plenty of seats available in the second and first levels to move down to. Three to four thousand people who used to show up are not showing up anymore. It's a disaster.
And can you blame them? This team should have been rebuilt two years ago. The team is stale, it doesn't play hard, they have no energy, there is no star power...what are we going to watch, exactly? Harvey the hound? And even he was just putting on the motions.
Anyway, it will be interesting to see what the building looks like after November 15th, when they switch over to QR code only. I would bet the attendance gets worse, not better. Could we be looking at a scenario where twelve thousand people attend a game? And we gave these clowns a new building. What a joke.
The team desperately needs a star. I'm sure the Eichel trade is coming. Not sure that will be enough.
Posted by A Z R at 8:09 AM No comments:

So Domebeers, What It Do?